In 2012 I started using a different blogging tool for our trips with the intention of moving away from Blogger for travel related blogs Travellerspoint.

Although I good tool, when on the road I needed to be able to update with text and pictures using email rather than typing test directly into an interface. Especially when using a mobile phone. Remember this was pretty much early days for smartphones.

Travellerspoint stull doesn't have an android app to add posts to the blogs but for $3 a month it can upgrade to allow a user to email stuff to the blogs.

Recently I have started using it to see if it is worth using for the Road Trip 2020. Here is the link.

Posted by InvictaMoto at 16:47 No comments:

Although I plan a lot using Google and Here Maps online, I do love the feel of a map in hand.

Today's buy is the Michelin 561 that covers the entire area of where we will be going on the road trip.

This copy came secondhand from a bookshop on Amazon.
Posted by InvictaMoto at 19:55 No comments:

A relatively short day today. MyRouteApp calculates it at 88 miles door to door. The standard route is to head down the main route to the coast and then along past Monaco.

And looking at the map book I saw the Col de Tende. Even with that the estimate is a little over 3 hours. So no rush in the morning to get going.
Then when I took a look at it on Google I decided against it. If I had an SUV I would be up for it, but not in a road car. So. It will be the tunnel instead.

We can have a leisurely breakfast and a walk around Cuneo to see the wonders of the city before we set off.
Posted by InvictaMoto at 15:27 No comments:

Well, that's it for now. Planning the overall route at least.  I have hotels booked on booking.com with the "free cancellation" and "no prepayment" option.

I have roughly mapped out a complete route but this doesn't take into account the waypoints that each days route has coded in to ensure we go the way we want! 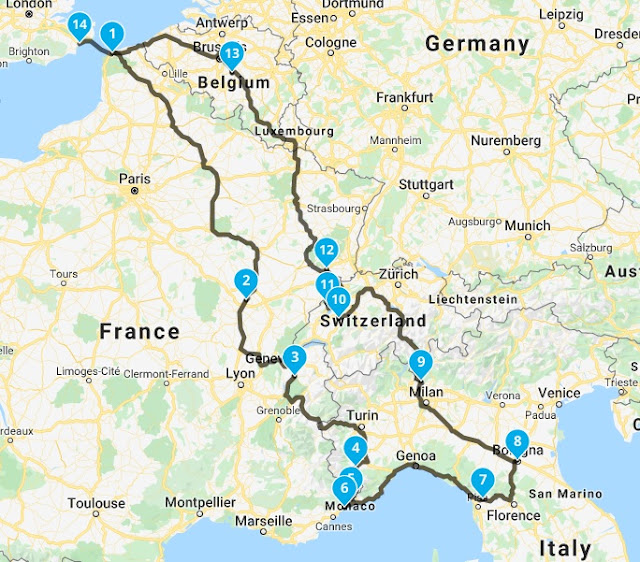 As far a Point 3 I have left toll roads switched on and so it will add to the trip cost it will mean we get the first long day over reasonably quickly between 1 and 2. From there it is no tolls from 3 to 6.

Points 6 to 7 are currently set to no toll.  The road seems to parallel the toll motorway for the entire 225 miles.

The Insignia currently has a range of about 650 miles in my day to day running.  With the first few days being motorway I hope to extend that when I can set the cruise control!

Later in the year I will start to scope out the cost of a crossing to France.

I expect we will take the Shuttle option simply as it is quicker. Well, quicker as long as there aren't any breakdowns or cancellations! That can be paid with Tesco Clubcard points.

This year as a one-off I signed up for the RAC also using Clubcard points to pay all but a few pounds of the cost. This will enable us to have European Breakdown cover for the trip as well as being covered at home in the UK.

Without any side trips, the total mileage calculated by MyRouteApp is 2105.

Posted by InvictaMoto at 13:25 No comments:

Once we had "bagged" the passes and arrived in Fribourg we have one and a half days to get home to collect Reggie from his holiday.

The non-toll exit from Switzerland is a bit convoluted getting into France around a few lakes.

Once across the border. The route runs up through Belfort towards Belgium.

The last night is near Namur. It's a long day on the road but it will enable us a shorter journey to the coast and the Shuttle or ferry home.

Namur to the coast is around 150 miles so if we are away early enough we should get a lunchtime shuttle and be in good time to collect the dog.

The kennel closes at 5pm so we need to be hurry  to get Reggie home.
Posted by InvictaMoto at 22:33 No comments:

To take in the passes will be a reversed S through the mountains.


There are so many passes and too few days to fit them all in. This route (above) takes in the Nufenenpass (2 above). This is the highest paved pass in Switzerland.

Posted by InvictaMoto at 16:42 No comments:

Day 9 has changed. It was formerly the day we drove up from Lucca to Como.

I wanted to squeeze in a trip to Bologna. So I did. The journey is only around 85 miles toll-free. The hotel is walking distance to the centre and the station.

This means that I had to shuffle the proceeding stops on a day. As I found out previously, the booking assistant at booking.com couldn't do a change of date for Como.

So to add a day meant cancelling all the stays and rebooking them a day later!

I was able to sort out Como. Although on the booking site there were only two rooms left. Booked.

Day 10 will be the drive up from Bologna to Como. I had planned to squeeze in a visit to the Moto Guzzi museum but it is closed all off August from the 3rd onwards!
Instead there is Modena.
And a little further away, Lamborghini.
So many supercars!
What had been Day 11 has become Day 12. I had a look at the passes...

The Nufenen Pass is the highest paved pass in Switzerland. It would be a chance not to be wasted.

The added mileage and zigzag around means the Gotthard will have to be forfeited.

So I have given up the Black Forest exit route and we will instead head east to Fribourg. It is still in Switzerland. I have booked an Ibis Budget. As an overnight it should be okay.

From there it is about 590 miles home taking the non-toll route.

So that's the next stage.

Posted by InvictaMoto at 15:15 No comments:

It's fatal. Planning and then seeing another "must see" or "must visit" place on a website or in this case, a book.

Once I turned to trip 1 and 2 in the Andermatt area and saw even more passes I haven't bagged previously. I had to include the Susten Pass in my route.

This may mean that the 40CHF vignette becomes an option or more like a necessity.

I know the purists will scoff at the thought of using the motorway for any part of a journey. Even though it's in the car and not the bike I can still hear them. Yep. Ignore the knobheads.

In MyRouteApp I have changed Part One to two bits. The first part as far as Airolo from Como will tolls turned to on.

The second part will go non-toll through the passes:
On the map and in the book they all look like a lot of hairpin bends .. Fun.

With 7 months to go before we set off there could be many changes to come.

There is also the Nufen Pass to take into account. It would mean some doubling back and missing one of the others.

Posted by InvictaMoto at 19:07 No comments:

So the options seem to be between:


In the end after checking hotel booking sites options 2 to 4 seemed to fade away.
So it looks like it will be the long day. I haven't ruled out the vignette for the motorways though.

I'll make an alternative Day 10 in MyRouteApp to see how that pans out. It adds expense but with Option 2 looking like £50 a night more for a hotel with the same level of comfort, inclusive breakfast and free parking as Lenskirch, it makes the 40CHF seem good value to speed our exit up!

Part One above is the same non-toll route from Como into Switzerland and as far as the Furka/Grimsel passes.

Part Two is now a separate route picking up from where Part One ends and taking us over more passes and winding roads until we meet the A8.

Overall, both parts added together knock two hours off the original Day11 all  non-toll route. So we have plenty of time to stop and take in the clean mountain air.

Posted by InvictaMoto at 09:01 No comments: